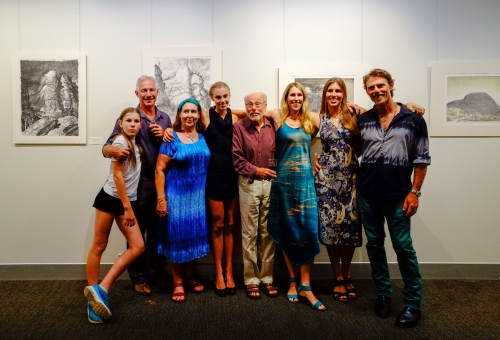 A full house at the Lone Goat last friday  as friends and family joined master printmaker Fred Genis to launch his exhibtion of Lloyd Rees lithographs.

No-one predicted that in the early 1980’s when Lloyd Rees started a small, experimental project with Port Jackson Press and master-lithographer Fred Genis, that this would crystallise into a major statement of many of the artist’s life-long themes. Rees prodigiously explored the boundaries of fine lithography, and discovered a new medium through which he could express his most intense creative strengths – the potential for broad and aggressive drawing and the sensuous and powerful use of line and tone soon took over his imagination.

Lloyd Rees came to lithography late in his career, well in his 80’s. The prints in this exhibition show an intimate collaboration between artist and printer. Lloyd very much enjoyed the medium and the relationship with Fred. These became one of his last projects before his passing at the age 93.

Fred Genis has lived in the Northern Rivers for many years since his retirement, staging several exhibtions in the region, and is a much loved and respected figure in in the arts community.